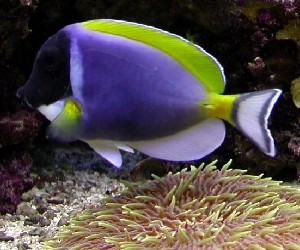 Powder Blue Tangs, just like other surgeonfish require highly oxygenated water. The PBT should not be considered unless you have a tank that is larger than 75 gal.

The Powder blue tang (PBT) in my opinion has to be one of the most beautiful of all the surgeonfish. A healthy powder blue will have a very dark, almost black, face and mouth area, Just above and below the dorsal fins there will be a very bright white and the main body of the fish will be a soft blue color, hence the name powder blue. To top dorsal fin will be a very bright yellow and there will be some yellow at the base of the pectorals fins as well. The anil and ventral fins will be white and the caudal fin will be white with its edges outlined in black. The base of the caudal will be yellow as well. This is also the location of the sharp boney spine. Below you can see a photo of my powder blue tang. When this fish is angry it will change its colorations and dark vertical lines will appear on its body. When this happens be careful of working in the tank as the PBT has very sharp spine (caudal peduncles). This spine is what the tang will use to defend itself when it feels threatened.

Powder blues just like other surgeonfish require highly oxygenated water. And to this end they should never be kept in an overcrowded tank as they will be one of the first to parish should the oxygen levels fall to low. These fish should be kept singularly in a system as they could become aggressive with fish of similar shape and colorations. They should be kept in a tank with as high quality water conditions as possible. The PBT diet should consist of mostly dried sea algae but on occasion adding some meat to the diet can be of benefit. I prefer to feed mine a basic diet of dried NORI daily and supplement this every few days with some frozen prepared food. I have seen my tang eat everything from NORI, to dried flake, to brine shrimp and other frozen foods. PBT?s will nip at your live rock throughout the day as well keeping hair algae as well as other macro algae?s at bay.

A healthy PBT should have a plump body and should not have a noticeable lateral line. The colorations should be very bold and the area behind the eyes should not be depressed. Powder Blues have alimentary faunas (bacteria living in their stomachs). It is recommended that treating with a copper based treatment be either avoided or be performed in as short a time period as possible to keep from damaging this faunas population. Fenner speculates that excessive treatments with a copper medication could lead to mysterious deaths of tangs in the Acanthurdis class.

The PBT should not be considered unless you have a tank that is larger than 75 gal. Due to the sensitivity of this fish its not recommended for beginners. If your interested in this fish its best to let your system mature for at least 6 months so that the tank can begin to establish itself. The reason is that just like other surgeonfish the PBT is a very active swimmer. PBT?s have been known to go into ?swimming frenzies? where they dart about the tank at high speeds. Having a tang in a small tank can cause undue stress. Ample hiding spaces should also be provided so when felt threatened they can retreat back behind the rocks.

With proper care these fish can be a wonderful addition to any saltwater tank.

This article was contributed by Aquarium Advice member fishfreek