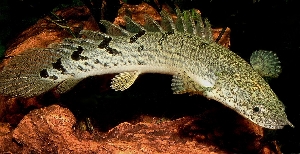 The fish of the genus Polypterus and the related genus Erpetoichthys are widely considered to be ‘primitive fish’ or ‘living fossils’. In fact, a number of large pet store chains are now selling Polypterus senegalus under the name ‘dinosaur eel’, a reference to their primitive nature and their snake-like structure.

Region: Congo River basin in the Democratic Republic of Congo (formerly Zaire), Africa.
Range Note: Six 10cm long individuals of Polypterus delhezi were removed from the C-14 canal in Broward County, Florida in 2001, probably the result of release by an irresponsible aquarist.

The fish of the genus Polypterus and the related genus Erpetoichthys are widely considered to be ‘primitive fish’ or ‘living fossils’. In fact, a number of large pet store chains are now selling Polypterus senegalus under the name ‘dinosaur eel’, a reference to their primitive nature and their snake-like structure. Fossils of Polypterids have been found in rocks that date back to the Triassic period (206 – 248 million years ago) when the dinosaurs were still in the infancy of their development.

The Armored Bichir is commonly found in lakes, rivers and flooded areas, often in turbid (muddy) water. Like other Polypterids, P. delhezi is generally nocturnal, spending much of the day hidden in or along the edges of aquatic plants or on the bottom. Food items found in wild-caught Armored Bichirs include insects, insect larvae and small fish.

One of the most distinctly-marked of the genus, Polypterus delhezi has an elongated body with a light gray to olive gray background coloration on its dorsal side grading to a yellow-white to white color ventrally. There are numerous black specks, sometimes forming a reticulated (net-like) pattern on the back and sides. P. delhezi has 7 to 8 nearly vertical black bars that are more or less distinct depending on the individual.

The dorsal finlets that give the genus its name (Polypterus means ‘many fins’) number between 9 – 12 and these begin a bit closer to the head than in most other Polypterus species. Polypterus delhezi has a relatively small head for its body size. The tubular nostrils are prominent.

Another young Polypterus delhezi. Note the external gills present on this juvenile. Head on with the Armored Bichir. Note the prominent tubular nostrils, the powerful lobed pectoral fins, and the graceful swimming style of this fish. Scales – The scales of Polypterids are called ‘ganoid’ scales because they are covered with a coating of a material called ganoine. This material is very tough and helps to prevent water loss through the scales, enabling Polypterids to survive out of water for a day or two. They are generally diamond-shaped and often have fine, tooth-like projections at the rear of each scale.
Swim Bladder – The swim bladder of Polypterids is modified into a pair of functional lung-like structures which permit these fish to use atmospheric air. Also equipped with efficient gills, Polypterus species are able to use both means of respiration to survive. Polypterus will frequently come to the surface of the aquarium to gulp air.
Pectoral Fins – The pectoral fins of Polypterus are lobe-shaped, similar in appearance to those of the ‘lobe-finned’ fish like the Coelacanth ( Latimeria ) to which they are not closely related. Bichirs have been known to propel themselves across land by using their pectoral fins as ‘legs’.
External Gills – Very young Bichirs have prominent external gills very similar in appearance to those of some young salamanders. These feathery gills are lost as the individual matures.

I first encountered the Armored Bichir in 1977 and immediately fell under its spell. In my opinion, Polypterus delhezi is the ‘prettiest’ of the bichirs, possibly rivalled in this area only by Polypterus ornatipinnis. It has a fluid swimming style and is very active for a bichir, frequently making appearances to search for a snack when the aquarium lights are on. In this habit it is very much like P. senegalus and P. palmas.

Though many people keep Polypterids in bare tanks, I have found that all species that I have kept over the years are more comfortable when there are hiding places available. A well-planted tank (real or artificial) is appreciated.

Because it is relatively active, Polypterus delhezi has a tendency to be a bit more ‘scrappy’ than some of its relatives. More than one can be kept in a tank but minor squabbles are not unusual and damage is occasionally done, especially to fins and snout. They will sometimes take an exploratory nip at other fish in the tank, probably to find out whether they are something that can be swallowed. Fish that are small enough to be swallowed often will be!

Tank-mates for Polypterus delhezi can include any fish that will not fit into its mouth. I personally do not recommend aggressive fish like large cichlids or very large catfish. Fish that could eat the bichir are obviously not a good idea! These might include snakeheads, piranhas, and other significantly larger Polypterus. I have kept Polypterus delhezi with similarly-sized Polypterus of other species, various Ctenopoma species, African Butterfly Fish (Pantodon buchholzi), large Congo Tetras (Phenacogrammus interruptus), ‘Kribensis’-type cichlids (Pelvicachromis species), African Knife Fish (Xenomystus nigri) and various species of Synodontis catfish.

Note: It has been reported that ‘Plecostomus’-type catfish are not good tank-mates for Polypterus because they tend to attach to the scales of the bichir and damage them.

Feeding Polypterus delhezi is a relatively easy chore as they are likely to eat almost any meaty food. I have had great success with frozen bloodworms, shrimp (fresh, frozen or freeze-dried), frozen beef heart, sinking carnivore pellets and carnivore sticks. Flake food is generally ignored. Small feeder fish are eagerly hunted, especially at night, and consumed as are small live shrimp. Occasionally a bichir will tackle a fish that you wouldn’t think they could eat. I have read reports of a 30cm (11.7 inch) Polypterus that ate a 15cm (5.9 inch) gar! Larger crustaceans like crayfish are often killed but frequently are not eaten. My juvenile Armored Bichirs have learned to come to the surface to take food from my fingers. To this date I still have all of my fingers!

Polypterus species are generally fairly healthy fish and seem to be more resistant (but not immune) to diseases like ‘Ich’. One parasite that is sometimes seen on wild-caught Polypterids is a freshwater fluke called Macrogyrodactylus polypteri. Polypterids are somewhat sensitive to commonly-used aquarium medications so they should be employed with caution. It is often best to use them at 1/2 to 2/3 of their recommended strength.

Because of its ultimate large size, I recommend an aquarium of no less than 50 gallons for adult Polypterus delhezi. They can be kept in smaller aquariums when young but will eventually need to be moved into a tank more appropriate to their size.

One special caution regarding all Polypterids needs to be mentioned here. They are all accomplished escape artists and their aquarium needs to be prepared in such a way as to block all their possible escape routes. Larger Polypterids can bump an aquarium lid hard enough to shift it aside so a thick glass top or some sort of weight needs to be provided.

The Armored Bichir, Polypterus delhezi, is an outstanding choice for people who like ‘oddball’ fish that are fairly active and personable. They will require a substantial aquarium as adults and cannot be kept with any fish that is small enough to be eaten.