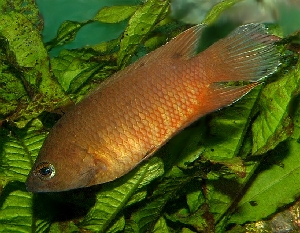 The Ceylon Combtail is commonly found in the shallow water of clear slow-flowing streams and rivers of Sri Lanka (and occasionally in ponds and lakes).

The continent of Asia is home to some of the most popular of the labyrinth fish, including the gouramis (Colisa, Trichogaster, Trichopsis, Osphromenus, Helostoma etc.), the fighting fish (Betta) and the Paradise Fish (Macropodus) among others. The Ceylon Combtail is a less commonly kept member of this group.

The Ceylon Combtail is commonly found in the shallow water of clear slow-flowing streams and rivers of Sri Lanka (and occasionally in ponds and lakes). Their specific habitat is described as being “near to sunken tree trunks or in root systems and water plants” and “near the river’s edge, at the foot of step banks, tucked away amongst plants”. Food items recovered from dissected specimens primarily included various insects, though smaller fish are also on the diet.

The body of Belontia signata resembles a stocky Paradise Fish in general outline. An identifying feature is the extension of the rays of the caudal fin (tail) beyond the web of the fin (giving the appearance of a comb from which this fish gets its common name). Coloration varies from light brown to yellowish to predominantly brick red above grading to a pale yellow or silvery gray below. Some color forms have blue markings on the lower half of their body. The eye often has a partial metallic blue edge. The unpaired fins (dorsal, anal, caudal) are usually bright to brick red, often with blue edges. The extended rays of the tail are frequently black. Males especially may exhibit a vivid pattern of dark bands during mating.

A young male Ceylon Combtail. The extended fin rays in the tail are just beginning to develop.

A female Belontia signata showing a significant amount of blue in the lower body. This is not a gender characteristic. 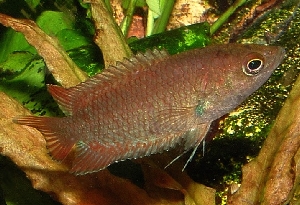 Like many of the other labyrinth fish, Belontia signata is primarily a bubble nest builder. The male is very territorial during the breeding process. The fairly small (compared to some gouramis) bubble nest is usually built by the male during the spawning process, frequently beneath the leaves of floating plants. The courtship is similar to that of other labyrinth fish and involved the male intertwining his body with the female’s. The eggs (up to 500 in rare cases) are placed into the bubble nest and both parents participate in guarding them. Unlike many other labyrinth fish, the Combtail parents will continue to guard their fry for a time following hatching.

I first encountered the Ceylon Combtail back in the 1970s when they came in to a local fish store labeled as ‘Red Gouramis’. I took home several pairs and was fortunate enough to breed them a number of times. I did find out rather quickly that the males are intolerant of each other, especially during breeding time, and a larger male will often kill a smaller one. In the intervening years I have not seen these fish available. I was lucky enough to discover a few of them in a fish store in 2004 and I immediately brought a young pair home.

Currently my Belontia signata pair is housed in a heavily-planted 26 gallon bow-front community aquarium with Tiger Barbs (Capoeta tetrazona), Blue Gouramis (Trichogaster trichopterus), Brilliant Rasboras (Rasbora borapetensis) and a number of loaches of various types. Within a few hours of their introduction to the tank the male Blue Gourami was ousted from his position of dominance by the male Combtail, who chased the gouramis and barbs around until an understanding could be reached. The rasboras were completely ignored, as were the loaches. No damage was done to any of the fish during this process.

As of now (March, 2005) the Combtail pair is still too young to breed but the male does occasionally pursue the female and display his courtship pattern.

Because of their relatively large potential size, I recommend no less than a 20 gallon tank for a pair of Ceylon Combtails and a larger tank will be appreciated by the fish. Based on my experience, it is best to keep a single pair (or a trio of one male and two females) in an an aquarium without other Combtails. Tank-mates should be able to take care of themselves. My male Belontia signata relentlessly pursued and eventually killed a similarly-sized male Pelvicachromis subocellatus (a west African river cichlid) that was temporarily placed in the aquarium.

The Ceylon Combtail is a rarely kept labyrinth fish that deserves more attention from aquarists. It is a pretty fish, relatively easy to breed and is fairly active in the aquarium. Keep in mind that the males can be territorial and aggressive and that tank-mates should be selected with care.