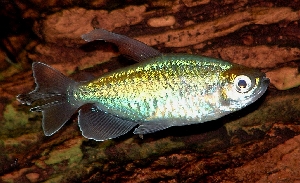 Phenacogrammus interruptus is the most commonly available African tetra and it is a real joy to have a school of these fish in an appropriately large aquarium. Properly lighted, their colors are unmatched by most freshwater fish.

While the majority of popular aquarium tetras hail from South and Central American, Africa gives us a number of attractive and unique characins to grace our tanks. The Congo Tetra, Phenacogrammus interruptus, is one of the most popular, colorful and commonly available of the African tetras.

The Congo Tetra is an open-water, schooling fish that is found in the rivers and lakes of the Congo River basin. It is primarily insectivorous but will also feed on worms and some plant matter.

If seen in a fish shop under less than ideal lighting conditions, the Congo Tetra is a rather drab, gray to silvery fish with a copper to reddish-brown band from the gill cover to the adipose fin. When the light strikes their large opalescent scales from behind the observer, however, the effect is striking. Nearly every color of the rainbow may be refracted from the scales, though yellows, greens and blues predominate. Congo Tetras are not as easily bred as many of their South American cousins. Breeding generally requires a large, well-lighted tank with plenty of swimming space that is at least partially planted. The water should be soft and slightly on the acid side. Filtration through peat may be beneficial. Spawning temperature is best between 75 – 77 degrees F.

The breeding pair should be conditioned beforehand with ample feedings of live or frozen foods. The male will actively pursue the ripe female until between 300 – 500 eggs are laid, generally in or around plants. The eggs are only weakly adhesive and many of them will sink to the bottom. The eggs hatch after 5 – 7 days. It is best to remove the parents after the eggs are laid. No parental care is provided and the adults may eat the eggs or fry.

I have kept Congo Tetras on a number of occasions over the last few decades and have found them to be a real asset in a large aquarium. They have a tendency to be shy, especially if there are not places where they can hide when they feel the need. A nicely planted aquarium suits them fine. They are definitely most comfortable in schools of 5 or more but consideration must be given to their adult size when choosing an aquarium. I recommend nothing smaller than a 29 gallon tank for a school of 5 of these fish.

Congo Tetras are not aggressive but occasionally males will have little spats that rarely result in any damage. Very tiny fish will probably not be safe with P. interruptus. Over the years I’ve kept Congo Tetras with bichirs (Polypterus), African Butterfly Fish (Pantodon), ‘Kribensis’-type cichlids (Pelvicachromis), and Synodontis catfish. Of course, one must be careful not to try to keep these fish with very aggressive fish like large cichlids or with fish large enough to eat them.

Phenacogrammus interruptus is the most commonly available African tetra and it is a real joy to have a school of these fish in an appropriately large aquarium. Properly lighted, their colors are unmatched by most freshwater fish. I recommend them very highly.