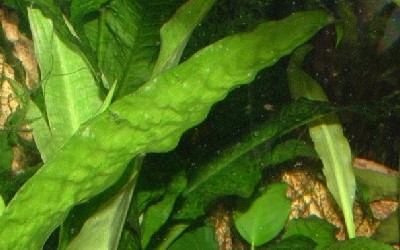 Cryptocoryne aponogetifolia is found in abundance along the edges of fast-moving rivers and streams on the island of Luzon in the Phillipines. The substrate is mostly basaltic rock and gravel from nearby volcanos (some still quite active) mixed with limestone.

Scientific Name:Cryptocoryne aponogetifolia Merrill; Family Araceae
Synonyms: None. This plant and Cryptocoryne usteriana were considered to be identical but recent evidence seems to show that they are separate species.
Common Name: None
Region: Phillipines – Sorsogon and Albay Provinces (island of Luzon). Formerly more widely distributed in the Phillipine Islands.
Maximum size: Leaves may reach over 1 meter (3 feet) in length in very large aquariums or ponds. More typically leaves will grow to about 50cm (20 inches) and may spread over the surface of the water.
pH Range and Hardness: Prefers neutral to slightly basic water with a moderate to high level of hardness.
Temperature: normal aquarium temperatures (72 – 84 degrees F) are preferred.
Light Level: Low to Moderate preferred (2.5 watts per gallon or less). Will tolerate higher light levels.
Ease of Growth: FAIRLY EASY

Cryptocoryne aponogetifolia was originally described by E.D.Merrill in 1919. For some time it was synonomized with Cryptocoryne usteriana but the two were confirmed as separate species by J. Bogner in 1984.

Considered fairly easy to grow, Cryptocoryne aponogetifolia prefers harder water than many others of the genus and seems more resistant to ‘Cryptocoryne melt’. Although not commonly seen in aquarium stores in the United States, Cryptocoryne aponogetifolia is not rare and is usually available from on-line aquarium plant specialists or pet shops that specialize in aquarium plants. It is commonly available in most European areas. Expect to pay a relatively high price (US$10 – 15 per plant).

Cryptocoryne aponogetifolia is found in abundance along the edges of fast-moving rivers and streams on the island of Luzon in the Phillipines. The substrate is mostly basaltic rock and gravel from nearby volcanos (some still quite active) mixed with limestone. The water can be crystal clear or fairly turbid (muddy) depending on the time of year and on farming activities along the river banks. C. aponogetifolia generally grows submersed (underwater) but occasionally is found growing emersed (on land – generally in very moist soil). Like other Phillipine Cryptocoryne, C. aponogetifolia grows best in water that is fairly hard.

The scientific name ‘aponogetifolia‘ refers to the fact that the leaves of this plant resemble the leaves of certain species of Aponogeton which are also fairly common in the Indo-Pacific area. Leaves are linear (long and straight) and are grassy green in color. Cryptocoryne usteriana leaves are similar in appearance but they generally exhibit a rosy red color on the undersides that C. aponogetifolia largely lacks.

A striking feature of both Cryptocoryne aponogetifolia and usteriana is their bullate (having a blistered or dimpled appearance) leaves.

The flower of Cryptocoryne aponogetifolia is generally cream colored with hints of red, reddish-purple or pink. The throat is usually surrounded by a pale yellowish rim.

After much nagging and coaxing, my favorite local aquarium shop finally got in a shipment of mixed (and unidentified) Cryptocoryne. After sorting through the more commonly available species like C. wendtii and C. ciliata, I was overjoyed to see two potted Cryptocoryne in the bottom of the box with long, very bullate leaves. I snatched them up immediately, paying US$10.95 each for them.

I planted the new Cryptocoryne at the back of my aquarium in deference to their obviously large potential size. Checking through my reference books and searching the internet I was able to narrow the plant down to either C. usteriana or C. aponogetifolia. The lack of any reddish color to the underside of the leaves made me lean more toward C. aponogetifolia. It wasn’t until one of the plants flowered that my identification was confirmed.

The substrate in my aquarium is plain aquarium gravel with no special preparation underneath. My light level is quite low…having only a standard 15 watt fluorescent bulb on a 26 gallon aquarium (less than 1 watt per gallon). I use Flourish Tabs in the gravel to provide slow-release nutrients for the plants and fertilize weekly with Flourish. Every couple of days I add the recommended dosage of Flourish Excel to provide an extra source of organic carbon. Occasionally I add Kent Micro and Flourish Iron to keep important micronutrients available. I do not use any sort of carbon dioxide injection.