Curing live rock? I didn’t even know it was sick! 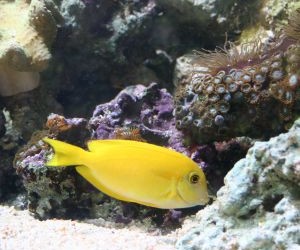 Learn about using ordinary rock in your tank safely.

Typically, you get cured rock from the LFS, some online retailers advertise cured LR, but because of shipping times there will be die off and it will need to be recurred (curing times may be lessened). What is curing, you ask? When rock is removed from the ocean, it sits on a beach, sometimes for a couple of days, before it is placed back in water. Naturally this causes some of the life (plant and animal) on the rock to die (die off). Basically put, curing LR is subjecting to large quantities of seawater, so it can be cleaned of die off and become a suitable media for nitrifying/denitrifying bacteria.
Live rock is alive because of the large diversity of organisms that make a home on the rock. During the curing process, a lot of these organisms will migrate to the sand, stands of macro algae or the sump, looking for an environment that is less hostile than the ammonia soup being created. Hard as it is to believe, this is the reason I prefer fresh rock rather than cured rock. I believe you will get a larger diversity of life and a larger number of desirable hitchhikers (also get the undesirables) by curing the rock your self. Due to the migration of the organisms, it is possible to make your own live sand as well.
Okay, now you want to cure some LR, but you don’t know how? This is how I cure my LR (this is not the only way to cure LR, it might not even be the best way, it is just the way I do it.

First thing you need is a container to cure the rock. If the rock is going into a new system with no life, I suggest using the tank as a curing vessel. If it is going into an established system, you need an alternate curing vessel. New Rubbermaid tubs or new Rubbermaid garbage cans are great for this. Personally, I prefer the tubs, because they offer a greater surface area per volume of water.

Got the container, what’s next?

1) Add 3-4 inches of sugar grain sized sand to the container
2) Put in the LR
3) Fill with freshly made S/W (make sure rock is completely covered)
4) Put in a few (2-4) power heads (you really want that water moving!!!)
5) Add protein skimmer (optional)
6) Do 50% water changes every other day (this is where the work comes in)
7) Do not light the curing vessel

Where my method differs from some, is the water changes and the lighting (or lack thereof). The reason I do the water changes is; the ammonia and nitrite levels in the curing vessel will rise high enough to kill, not only the organisms alive on the rock, the nitrifying bacteria that mineralize the ammonia and nitrite. The water changes keep the ammonia levels from going high enough to be toxic to the nitrifying bacteria, with the added benefit of saving some of the life on the rock. Some say, water changes slow the nitrogen cycle, I disagree. Fortunately, for us, enough nitrifying bacteria (although weakened) survive the shipping process that the water changes actually speed up the cycle. Even changing 50% of the water every other day, there will be enough ammonia to feed the bacteria population. The water changes are, simply, a stopgap measure until the rock can take care of the ammonia. Using this method, the cycle should take approximately 2-3 weeks until completion. The reason I do not light the curing vessel is nutrients. During the curing process nutrients will be very high, these nutrient, byproducts of the die off decomposition, are algae food. It is not uncommon for undesirable algae to gain a foothold during the curing process. If you take away the light, the algae won’t grow. Some of the coralline algae growth will be hindered, but it will make a great come back, once you turn the lights on.