Browse any aquarium forum with a saltwater section, and sooner or later (most likely sooner) you will see a poster asking about a worm he or she found in the sand or rocks. And within the first page of responses, you will see a variety of opinions, usually including at least two people declaring it a bristleworm and harmless, but at least one stating that it looks like a fireworm and is dangerous.

The word fireworm has a lot of negative press surrounding it in the aquarium hobby. Some rumors I have heard is that they will eat corals, attack your fingers, shoot their bristles, and kill anything they touch. The truth, however, is far less sinister.

The terms bristleworm and fireworm generally do not refer to a specific species, but rather to the entire Polychaete worm class, which includes more than 10,000 species.Feather dusters are bristleworms, too.

For the purpose of this article, the name bristleworm will be used. A brief description for the uninitiated may be useful. Being annelids, and thus related to earthworms, bristleworms have a very similar external structure. They are segmented worms, generally long and thin, though they are able to extend and contract to an extent as part of typical annelid movement. Polychaete means “many bristles” and these bristles are one of their defining characteristics. Each segment of the worm’s body has a pair of small extensions called parapodia, used for movement and for some species, respiration. The bristles extend from the parapodia and can aid in movement as well as defense (Barnes). The bristles, called Chaetae or sometimes setae, are hollow, chitinous tubes. They can range from long and flexible strands to short barbed hooks (Rouse). One interesting fact, most bristleworms have eyes! So essentially, a bristleworm is any segmented worm with bristles. Simple enough, right?

These worms have a terrible reputation in the marine hobby, with many hobbyists blaming them for everything from dead fish to tank crashes. This reputation hearkens back to the beginnings of the marine hobby when many of the animals we consider easy today were still very difficult to keep alive. Without understanding specific care requirements, many fish and invertebrates would have dismally short lifespans in captivity. Often, these animals would die at night, and when the lights came on in the morning, would be covered with worms. You can imagine the reaction. So little was known about polychaetes that they were ‘clearly’ the culprits. In reality, the animal died from poor care, and the worms were attempting to dispose of the mess before it rotted and fouled the water (Shimek).

Of the more than 10,000 species of bristleworms currently known, it is impossible to say how many end up in aquariums, but this much can be said with confidence: of those that do, all but a very few species are beneficial. 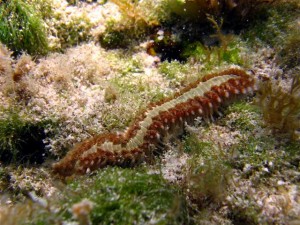 The Bearded Fireworm, Hermodice carunculata is the species most often in mind when someone refers to a “fireworm” and while it is indeed a coral eater, it is a very specialized one. The feed mostly on gorgonians, and in quite a graphic manner. They find a branch tip and essentially deep throat it, chewing and digesting the tissue before extracting the skeleton and moving on. A gorgonian with dead white tips that is otherwise healthy may be an indication of fireworm activity (Gibb). Gorgonians are not commonly kept, and as such, even this “dreaded fireworm” species is unlikely to cause serious harm to the life in a typical marine aquarium. 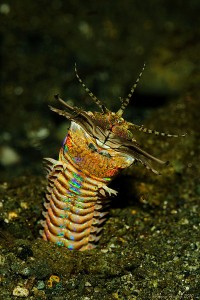 The second species of interest is the Bobbit Worm, Eunice aphroditois. The Bobbit Worm is an ambush predator, hiding beneath the sand and waiting for a fish to swim along before springing out and biting with enough force to cut smaller fish in two (Davey). While the Bobbit Worm is frightening in appearance, that same appearance combined with it’s incredibly specialized mode of attack, make it very easy to identify. This may be the only species of worm that I would recommend removing immediately if discovered in an aquarium.

While many aquarists are concerned that the worms may embed their bristles into fish or corals as they move about, this simply is not how the worms are constructed. Annelid movement is not suited for stabbing sideways motions. Bristles break off after they puncture something else, which requires lateral forces that the worms are incapable of generating. If a worm gets you, it’s because you poked it. If a worm gets a fish, it’s because the fish was too nosey. While the bristles are generally more irritating than dangerous, it is worth noting that they are indeed hollow, and marine aquariums are filled with microbes that can be dangerous. Proper care for a bristleworm “sting” include a vinegar soak to dissolve the chitinous material, followed by hot water to penetrate into the punctured skin. A visit to the doctor to evaluate for infection is in order, and possibly a tetanus booster. All that being said, the worms are not out to get you and would rather not lose their bristles to your fingers.

The simple facts of the matter are that the vast majority of the worms we find in our aquariums are not only harmless, but beneficial! These little worms help to sift the top layer of sand, eat fish food that might otherwise rot, cleanup fish excrement, and rapidly consume the bodies of any animals that might die out of sight. There may not be another animal that is more valuable to keeping our tanks healthy. Though they may not be as beautiful as the animals we introduce intentionally, don’t get squeamish. Simply repeat this mantra. The worms are our friends.