General:
Temperature: 78-84 degrees F
pH: Prefers neutral to acidic pH levels, but can tolerate alkaline conditions well.
Hardness: 1-15 dH
The Bolivian Ram is much heartier than the German Blue Ram. It can handle hard, alkaline water much better than a GBR can. Also, Bolivian Rams do not get sick as easily as German Blue Rams.

Compatible tankmates: As far as Cichlids go, Bolivian Rams are some of the most peaceful. Be cautious when putting them with small fish such as neon tetras, or obviously large or mean fish that could kill, eat, or harass the ram. Larger tetras such as Rummynose Tetras, Emperor Tetras, and Silvertip Tetras will work, and livebearers such as Platys and Mollies would be fine as well. Many people keep them with Discus because Bolivian Rams can tolerate the high temperatures needed for Discus. This is perfectly fine. Bolivian Rams will most likely kill and or eat small shrimp such as Red Cherry Shrimp, but Bolivians will be fine with larger shrimp such as Ghost Shrimp, Amano Shrimp, or Bamboo Shrimp. However, sort of like bettas, the personality of the fish has a large impact on what can be kept with them. You may come across a very territorial one that is a bully, and you may get others that are very nice. It depends. However, they are much better than bettas and normally tolerate tankmates very well. I also want to note that when breeding, Bolivian Rams can become aggressive to tankmates. It usually is a good idea to separate the breeding rams from the rest of the fish in the tank to make sure that no other fish are harmed.

Diet: Bolivian Rams mainly stay in the bottom region of the aquarium, so sinking Cichlid pellets are often fed to them. Frozen foods work too. Flakes also work, but it may be a while before your ram learns to come up the surface to get them. Live foods such as Brine Shrimp are also accepted.

Description: The Bolivian Ram is a beautiful fish, often used as a centerpiece fish in aquariums. It’s main coloration is a yellow-tan, but a large part of its body is a grey-blue color also. They have a black spot on each side of their body, and also have red edges on their fins.

Reproduction: Bolivian Rams are egg-layers. They normally choose a flat rock or a depression in the substrate to lay their eggs. They will both swim over the same area, and then the male will start to guard. The female will lay some eggs, the male will come and fertilize them, and then go back to guarding them. The female will then lay some more eggs, the male will come and fertilize them, and once again go back to guarding. This cycle will go on until the female has laid all her eggs. Keep the water temperature at 83 degrees and the eggs will hatch in about three days. In another three days or so, the fry will be free-swimming. You can keep the parent rams in the tank because the parents will not eat the fry. However, there is a chance the parents will breed again in a few weeks and kill the fry while guarding their eggs. 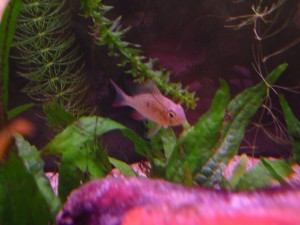