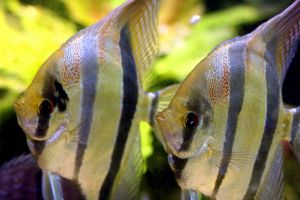 First seen in the market in 1911, the freshwater angelfish, aka pterophyllum scalare, is one of the most popular fish in aquaria today. With large disc like bodies, long flowing fins and a multitude of colors and patterns, angelfish are a stunning addition to most aquariums.

A member of the South American cichlid family, the domesticated angelfish has been bred to handle a wider variety of water parameters then its wild cousins pterophyllum altum and the wild caught pterophyllum scalare. Graceful, regal, it’ easy to see why it’ been called the king of the aquarium.

Angelfish originated from shallow, still, acidic waters with heavy vegetation. That being said, tall tanks are preferable for these majestic fish, as they will need the space to display their fins properly. Full grown, angelfish can reach lengths (from nose tip to base of tail fin) of 6 inches, although 4 inches is more commonly seen. This does not include finnage, which in the case of superveils can reach an additional 6 inches. Angelfish look especially stunning in well planted tanks, as their tall thin bodies move between the leaves. Amazon swords and Java ferns are often found in angelfish tanks. Because of their body shape, angels are not efficient swimmers and prefer slower moving water. While good filtration is a must, as angels truly need top notch water quality, filters which cause a lot of fast current are not recommended.

A minimum of 10g each for an adult angelfish is the standard recommendation. However, do keep in mind while they are one of the more peaceful cichlid species, a breeding pair can be ruthless and more space is required for tankmates to keep their distance. Single angelfish have also been known to become extremely aggressive to all tankmates; reasons for this behavior is unclear.

Domesticated angelfish can tolerate a comparatively wide Ph range; while happiest at Ph levels of around 7.0, slightly higher and lower Ph levels can be tolerated and angels have been known to breed at Ph levels as high as 8.0. Dh ranges of 5.0-13.0 and temperatures of 80-85f are also recommended. Driftwood is often used in angelfish tanks to naturally lower high Ph levels.

Angelfish come in a variety of colors, patterns and finnage. Solid gold, solid black, silver with stripes, marbled black and white, the popular koi angelfish with its bright orange/red markings and other striking combinations, mixed with standard, veil, superveil and combtail fins make for a stunning display.

Angelfish are easy to feed, and are consummate beggars. Diet should consist of a mixture of proteins and vegetation; angels are omnivorous and do best on a varied diet. Quality flake, pellet, stick and sinking foods should make up a major portion of their diet. Fresh vegetables such as zucchini as well as frozen, freeze dried or live food (bloodworms and crushed snails are a favorite) make a nice treat. Do be sure not to overfeed despite the begging; a fat angelfish is not very attractive and overeating can reduce an angel’s life span, which can reach 8 – 15 years.

Most fish which are compatible with the angelfish water parameters and temperaments are choices for tankmates, with some caveats. Small fish such as guppies or neons may become snacks for their larger brethren (neons are a food source for wild scalare). Fin nippers such as tiger barbs are a poor choice for obvious reasons. Angels have been known to harass other longfinned fish such as bettas. However, fish with medium temperaments, such as gouramis, other less aggressive barbs, dwarf cichlids, plecos, loaches and some of the larger size characins make good tankmates, and angels have been known to cohabitate with knifefish as well.

Angelfish breed readily in well kept tanks with good water quality. A pair will generally start off the breeding dance by becoming rather aggressive towards each other, and will often be seen ‘lip locking’. They aren’t kissing, but testing each other’s strength to determine if the other is a suitable mate. Once the determination is made, they will most likely become aggressive to all other tankmates, shooing them away from the chosen egg laying area, often into a small corner of the tank! They will begin cleaning the area, picking off debris. Angels aren’t particularly fussy about where they lay as long as it’s a somewhat smooth, semi-vertical surface. Most breeders offer angels some slate on which to lay eggs, but angels have been known to lay on uptake tubes, tank walls, plant leaves (real and fake) and even heaters. Male and females take turns during laying, with the female making a run up the chosen surface leaving eggs, then the male following and depositing milt. This will be done a number of times, and angelfish have been known to lay over 1,500 eggs on occasion. Wild angelfish are excellent parents, although our domesticated angels do not always display that skill. Good parents will fan the eggs, which will hatch in about 72 hours at temps of 78-82f. They will spend the next week or so as wigglers, with the parents sticking them back onto the chosen surface (wigglers have a ‘glue spot’ on their heads to keep them attached) if they fall off. After about a week they become free swimming, and should be fed baby brine shrimp as their yolk sacs will be empty by then. Angelfish can also be raised artificially. Details on breeding and raising angelfish, both parent raised and artificial, can be found at http://www.angelsplus.com/breeding.htm

Angelfish can be found at most pet stores. If one is interested in breeding however, it’s best to purchase angels from a reputable angelfish breeder, as you can be assured a quality fish with a known pedigree/lineage. Whether the centerpiece of a show tank, or a member of a community tank, angelfish are an attractive and fascinating addition to the home aquarium.