Hello all. Thank you for your vote on my aquarium to win the month of July 2017. I take great pride in being a member of this forum, as the tank is a direct reflection of your advice to me over the last few years. 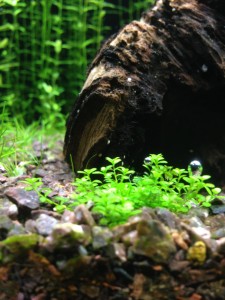 As a child I have always been fascinated with animals in general, and the need to care for them. Actually, I am in the business I am in now so I can fund certain animal charities. I want to give a voice to those who have none. One of the things that always interested me was the aquarium hobby. I can remember, when we went into a pet store I always went straight to the aquatics section to look at the fish. To me, it was peaceful to watch, and having a whole eco-system in a box was fascinating.

I graduated from Auburn University in December of 2013 (War Eagle!). That Christmas I asked for an aquarium because I always wanted one, and now that I was out of school, I thought it was a good time to start. So, on Christmas day I received a Fluval Accent 25 gallon aquarium with the stand. At the time I really knew nothing about the hobby, and thought the tank was perfect. The set-up came with the tank, LED light bar, heater, and filter that was in a water column inside the tank. I knew I wanted live plants, but that is about it. So I went to the store and bought gravel, plants, and some decorations. I went home and started setting up the tank. I bought fish the following day. 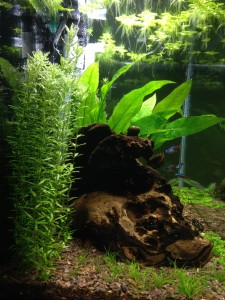 To say I experienced a steep learning curve would be an accurate one. I had no idea about tank cycling, or the appropriate fish. I also did not know about fish diseases. So in the first three months in the hobby, I battled a fish-in cycle, ich, and incompatible fish. Everything did level out and for the next three years I enjoyed a stable low-tech planted aquarium. In that time I bred F1 German Blue Rams, and to this day are my favorite freshwater fish.

During those years I was very successful in selling excess plants I had grown. In February 2017, I decided to use that money to overhaul the aquarium and turn it into a high-tech aquarium. One thing that always bugged me was I felt the aquarium did not represent all the hours I put into it, or the knowledge I had amassed. It also bugged me that I had a fake tree root in the tank, no real substrate, and a noisy filter that took up space in the aquarium itself. So I ventured out and started the rebuild. I archived every step in the thread hyperlinked in my signature. To give you a rundown, I gutted and replaced everything with the exception of the aquarium itself, Mopani wood, the stand (for now), and a few plants. 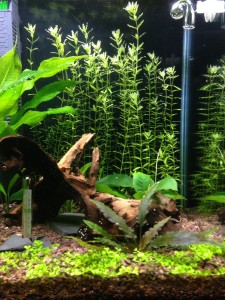 This rebuild was not without its challenges as well. I had an ammonia spike (despite my textbook efforts of preserving the BB) that caused my prized F1 German Blue Ram to go blind, which she now lives in my QT tank with soft objects, Blue Dream Shrimp, and her own filtration system (living happy though). I also had the aquarium develop a leak (while on vacation!), which caused me to tear down the aquarium to seal the leak a few months after the rebuild.

Currently, I am in the process of growing out my plants again. The plants are pearling nicely, and even flowering! My greatest pride is getting my Baby Tears to thrive. I am having them carpet at the mouth of the cave, with Dwarf Hairgrass carpeting on the side.

INHABITANTS: I have a Clown Pleco (last original fish from 2013), Honey Gourami, Neon Tetras, and Nerite snails in the aquarium. I plan on adding a community of Cardinal Tetras with a pair of Scarlet Badis to the aquarium once my German Blue Ram passes away as she cannot have any other fish in her quarantine tank due to the stress of fish bumping into her. 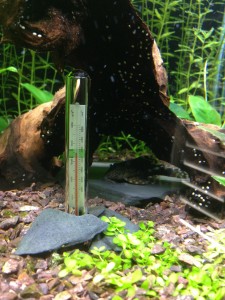 MAINTENANCE: I do 50% water changes, and glass cleaning for both aquariums weekly with the filters being cleaned every six weeks. The CO2 system runs at 3 BPS (drop checker stays at light green), and the temperature set at 77.5 degrees Fahrenheit. I have the lighting replicate a sunrise at 12:00 PM, and a sunset at 8:00 PM.

FEEDING: I alternate between feeding the fish Omega One fish flakes and frozen brine shrimp/bloodworms, with the pleco fed ¼ of an Omega One algae wafer every other night. No feeding is done on Saturdays. 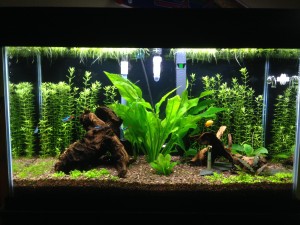 CONCLUSION: I truly love this hobby, but am also very responsible. I make sure everyone is compatible with each other, and that my aquarium is well above the minimum tank size needed for each fish.

If I can ever pay it forward and help someone with high-tech aquariums, or German Blue Rams, please feel free to use me as a resource.