My name is Greg Heifner and I am a reef keeper.

I am 61 years old and have had fish tanks since I was a child. I spent a lot of time in the hospital when I was young and many pediatric waiting rooms has fresh water fish tanks. I found the fish tanks would relax me and help me control pain. I was hooked for life.

During college, I opened a retail fish store and a wholesale breeding and importation facility. I had over 300 tanks for several years as I ran these businesses’ and went to engineering school. I learned an enormous amount about breeding and keeping fresh water fish. I those days only those that wanted to throw away money did saltwater.

I became an advanced underwater photographer and airplane pilot in later years and fish keeping really helped me identify critters underwater and photograph them. It also instilled an appreciation of where these guys come from and how important it is to make your best efforts to not only sustain them, but to give them the opportunity to grow and live a natural life span.

30 years ago, a close friend and diving buddy announced they were setting up a saltwater tank. I did what most people did then and tried to talk them out of it with stories of horrible and expensive mistakes I had seen made. They ignored me (something I have become accustomed to…) and proceeded to set up a 125 gallon tank with a trickle filter, bio balls, the works. It had its ups and downs, but it worked pretty well. I decided if they could do it, I could.

I then went and set up my first saltwater tank, a 55 gallon I had from freshwater days. We killed our fair share of fish and coral in those days. We simply didn’t have the knowledge and tools we have now. But we didn’t give up. I decided it was time to use my engineering and fish keeping expertise to build my ultimate fish tank. That was over 20 years ago.

It started with reading a book by Dr. Walter Addy from the Smithsonian, called the “Dynamic Aquarium.” It discussed natural systems that could be recreated in miniature in a reef system. Most of the book touted the advantages of making algae part of the filtration system rather than just a nuisance. It was my first exposure to algae turf scrubbing and protein skimming. 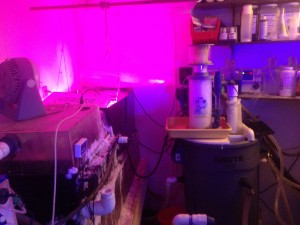 I designed the tank to wrap around an outside corner in the center of our home, which is round. I had the tank and the algae scrubber built by an acrylic company in St. Louis. I built all the cabinetry as well as a hydraulic top that contained, at that time, 1500 watts of MH and 200 watts of actinic lighting. It’s all LED now. The plumbing went downstairs to an old darkroom I converted into the fish room where all the working of the system would be installed.

It was a big job, but when completed the system has worked pretty much the same way for over 20 years. The algae scrubber produces about a pound of algae every other week and that is either disposed of or feed to the tangs. It uses a dump bucket that pours 2 gallons of water over grates every 11 seconds. This wave action causes the algae to grow thick and captures a lot of miscellaneous organic matter in it. It is lit by hydroponic LEDs that are a bright magenta color, tuned for plant growth. Additional filtration is two Lifegard fluidized filters retrofitted to use Purigen in one and Phosgard in the other. These chemicals help push my organic levels lower than the algae scrubber and skimmers would on their own. I regenerate the Purigen and that has worked splendidly. I also use carbon to reduce interspecies coral battles. 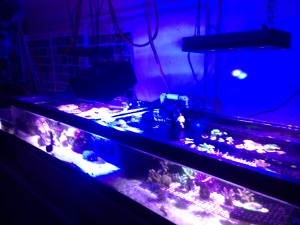 The rest of the fish support room houses sinks, two protein skimmers, two sumps of about 120 gallons total an emergency overflow sump, dosers, chiller, heater, freshwater barrel and two frag tanks. One hard coral frag tank is 6’ long and is about 90 gallons. It is lit with Rapid LED Onyx fixtures and a 200 watt DIY LED on a hydroponic rail so it moves from one end of the tank to the other over an hour. It gives me a PAR of over 1200 for a few minutes periodically and the SPS corals love it. Causes them to grow very densely. The other frag tank is a 30 gallon rubber stock tub that houses soft corals. I use Korellia Magnum fans for circulation everywhere. I dose a homemade alk/cal (BRS) solution using a medical doser bought on Ebay.

Everything is controlled by a Digital Aquatics Reefkeeper system and is remotely monitored over the internet. The main tank and downstairs tanks all have “fishcams” so I can see what’s up from my iPhone. 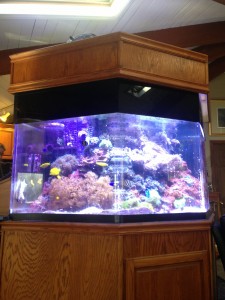 The main tank is approximately 300 gallons and has hundreds of pounds of Fiji live rock. The front panel was bent in two places giving the front three panes. This allows the tank to wrap an outside corner of the room. From the fish’s view point, they can’t see one end of the tank from the other end. I think with the tangs especially, this relieves stress as well as my layout provided many tang sized hidey holes. Most of the fish are over 10 years old. Several corals are as old as the tank, so over 20 years old. The lighting is all Chinese LED’s which I took a great deal of grief from my fishy friends over my announcement that I was tired of cooking my fish with MH lighting and was moving to cheap LED fixtures. But they worked wonderfully and was one of the best moves I made. The tank is now lit with 700 watts of LED, half white, half blue. These lights are in an enormous wooden hood I built that raises with a car jack like the top of a beer stein to give access to the top of the tank.

I pay close attention to both Phosphate and Alkalinity as those seem to be key indicators of reef health. I also actively monitor ORP.

I do a 10% water exchange (50 gallons) about every other week. I have a seven stage RO/DI system. I also dose Kent Essential Elements as well as Alkalinity (baking soda) and calcium which I mix using BRS materials. 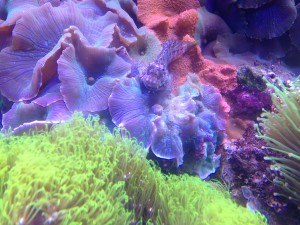 I feed daily, a mixture of Romaine lettuce, dried Nori sheets (Chinese grocery) and a homemade food for the carnivores. The homemade food is made up of crab, shrimp, white fish, scallops, VitaChem and garlic extract. This is far less expensive and better for the fish. I do not feed my corals or clams.

Everything was grown out from small frags. Many were rescues from the local store and friends.

Almost too many to list easily. And I am very taxed when I comes to their names…

I have come to several conclusions during this long term project.

The best disease prevention isn’t a QT tank or UV sterilizer, its careful livestock selection and an environment where food is high quality, water quality is optimum and stress is low. The fish can take it from there.

LED’s rule. Low heat and intense lighting with no “roll off” of the intensity after 6 months. My power bill says thank you as well.

Homemade food not only saves tons of money, but it is far better for the livestock.

Involvement with a forum like Aquarium Advice is invaluable. There are many mistakes I would not have made if this type of forum was available when I started my reef, but back then, there was no Internet.

Buy livestock using your mind, not your heart. Don’t con yourself into thinking you can keep that Morrish Idol alive in your 55 gallon starter tank. You will save yourself money and the guilt of killing an amazing creature. The LFS is there to sell you fish and coral, not to talk you out of disastrous decisions. Some will, but most will just take your money. 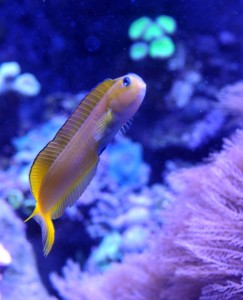 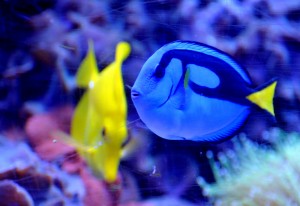 Move slowly. Every time I tried to “short circuit” the process I failed. Nature takes her course with reef tanks and you and her had best be friends. There is no fast cycle method that I trust.

Algae can either be your friend or your enemy. It is the best natural way to export organics away from your tank if you set up a system that allows you to harvest it from a scrubber or sump. Chaeto is my favorite as it grows fast and is easy to harvest. Just dispose of it properly as it can get into your local water ways and create havoc. 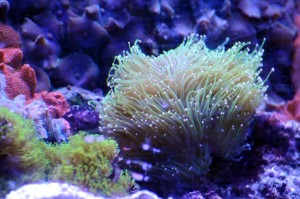 Some fish were never right for aquarium life. As a diver, I grimace sometimes when I go to the LFS and see a creature that just doesn’t belong there. We need to be responsible with our hobby, or outside forces will shut it down.

Grow corals and take frags to the LFS. That puts us all on the path to a sustainable hobby.

You never have a big enough tank. Even though mine takes an average of an hour a day to maintain, I wish it was even bigger. 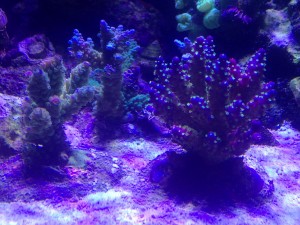 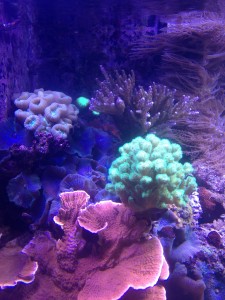 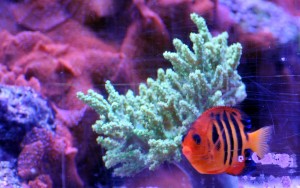 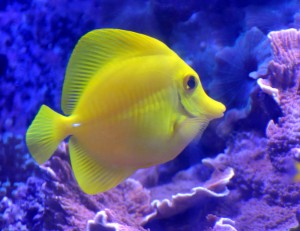