Relieve Stress in Your Business or Home With an Aquarium 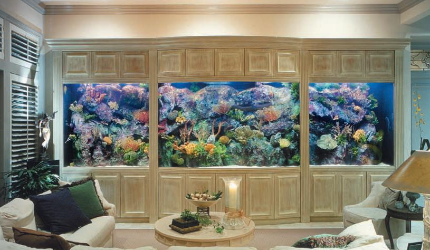 Studies have shown that watching an aquarium has multiple health benefits such as lowering of high blood pressure and reduction of anxiety. Medical offices and retirement homes are two examples of places that can reap the benefits of fish tanks.

There have been multiple studies on the affects of people watching fish aquariums, resulting in the conclusion that aquariums have a positive influence on those viewing them. Benefits include a reduction in stress, high blood pressure, anxiety, pulse rate and muscle tension.  Aquariums can even help with insomnia for those who need  a little more peace and quiet at home.  Children with hyperactivity disorder responded well to aquariums, helping them calm down.  Alzheimer patients have been found to eat better and feel less anxious and aggressive when having a fish aquarium about.  Medical patients feel less stressed entering an office for an exam when having the opportunity to watch an aquarium while waiting for their appointment. Some patients even required  less pain medication.  Those who work at computers for hours a day can ease their mind for a moment when an aquarium is in the office, helping them feel less stressed and more productive.   Fish tanks are great tools for mental health, for any age and any facility whether it be at home or in an office.

Having an aquarium in a medical or dental office brings many rewards. One study in a dentist office determined that patients who watched a fish aquarium before their encounter with the dentist felt less anxiety and required less pain medication than those who did not.  Even hypnosis before a dentist appointment was not as effective as a patient observing a fish tank before an appointment.  Many people waiting for a medical appointment feel a high degree of stress and anxiety. Aquariums have been proven to help reduce that anxiousness along with high blood pressure as well as decreasing pulse rate and muscle tension.  Patients of all ages can complete a medical or dental appointment with ease rather than resistance.  Children especially have a positive response to fish aquariums.

Whether children are at home or in a daycare, simply having an aquarium around can relax them.  Even children with hyperactivity disorder react in a positive manner.  Aquariums provide a place of serenity and an inquiry into the wonderful world of nature for kids.

On the other end of the spectrum, retirement homes can benefit from fish aquariums as well.  Studies were conducted in an assisted living home with Alzheimer’s patients and the placement of aquariums; the results were astonishing.  Eating can become an issue with the elderly;  Alzheimer’s patients watching a fish aquarium while eating stayed longer at the table, and ate up to 27% more food than those who had no view of an aquarium.  In this facility with over 62 patients, the amount of food consumed increased significantly along with an increase in patients weight over a 16 week period.  Less nutritional supplements were required as a result, which reduced health care costs in the facility.  A decrease in physically aggressive behavior among patients was also observed.

Dustin Williams is the author of this article on aquariums, and can provide more information at http://www.familybizfishtanks.com.