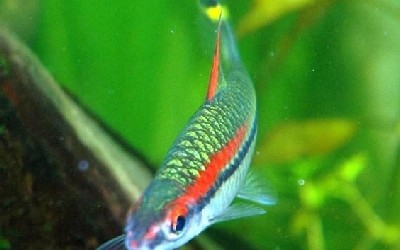 The roselines prefer a tank with a decent current, which will highly oxygenate the water. They also prefer a highly planted tank.

Diet: They’ll eat almost any high-quality prepared food, but wouldn’t mind a serving (or more) of live food or even a nibble of your soft-leaved plants.

Care: The roselines prefer a tank with a decent current, which will highly oxygenate the water. They also prefer a highly planted tank as well. As for food, they eat just about anything – from flake food to frozen bloodworms, brine shrimp, beef heart, etc., as well as live foods. Some say they also like to nibble on softer plants, but I personally have not seen this yet. They also like a tank where they have a lot of open swimming space as well, and thick plants to play tag in. They also seem to know how to play hide and seek as well – where one would take off, and the others would search him out. They don’t seem to make much out of my rock caves, but as for the driftwood, they so like to chase each other around the larger driftwood, as well as through the branches of the smaller, preying mantis-looking driftwood with branched legs.

Water Region: Fast-flowing streams and rivers – these are apparently full of vegetation and are highly oxygenated.

Color: As for the coloration, this fish is spectacular. The fish is a shiny silver, with a solid black line running down the middle of its body. Then above that line, there is a shorter bright red line, not going all the way back to the tail. There is also a hint of yellow between the two lines. As for the tail, it’s quite striking, with black towards the tips and yellow just inside the black. As for the red line, it also runs into the head and through the upper half of the eyes. They also have a red streak in their dorsal fin. Overall, this fish is quite colorful, and beautifully shaped, with its long, slender body.

Acclimation: Here’s my way of acclimating. I take the bag of fish, and empty them into a small bucket. Then with a cup, I will slowly add tank water until the bucket is half full. Then I will empty half of the water in the sink and do this again. Generally this will take 20 minutes or so. And I’ve never suffered any losses, even with some of the more delicate fish like my German Blue Rams. Once acclimated, I will empty the bucket into a fish net over a 5 gallon bucket, and place the fish into the tank.

Breeding: Not reported in captivity. 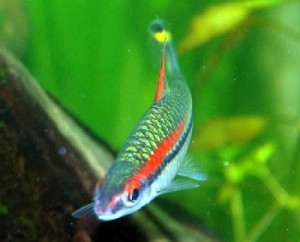 Comments: Since the roseline sharks are part of the barb family, they school fairly well. They don’t always school, but for a good part of the time, they like to hang out with each other, swimming around the tank.

I’ve seen on sites where they say the minimum tank size is as low as 30G, but I don’t recommend that. Mine would be cramped in a 30G at nearly four inches each. I think the smallest is three inches. The rest are much bigger than that one. My minimum tank size would be 55G, preferably larger. In my 75G, it does give some room to swim around, but the schooling effect would probably be more apparent in a much larger tank. And being a barb, three or more is the preferred group size. But a larger number is better.

The roseline sharks are very mild-tempered and calm. They love to be fed. They feed both in the water column and at the surface, sometimes with a big splash. They are also starting to get used to me already.

With the tetras, the roseline sharks are just impressive. I currently have rummynose tetras and serpae tetras in with them, and all get along so well. And the colors are just phenomenal.

Now as for me, they just love me to death, lol. I sit here watching TV, and when I turn my head, all 6 of them are going up and down this side of the tank, saying feed me, feed me, lol. And with those eyes looking at me, guess who wins? hehehe…