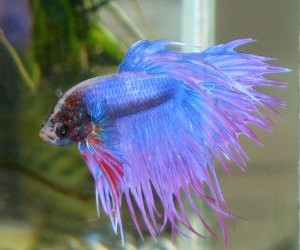 There are over 15 different species of betta. Betta splendens are the ones found in petstores. Bettas are labyrinth fish, meaning they come to the surface for air. As long as a betta has enough water to cover its self and can get air it can survive

Background: Betta splendens originate from Thailand, which was then called Siam (hence the bettas name). They live in the huge rice paddies. People would go out and get these little fish and then fight them (probably just males, not sure if females were used). Just like dog fights ect, people would place bets. It was a very popular thing to do! Soon people began to breed them to fight. And thus the betta craze was born! The wild bettas were dull brownish colours with short fins. After years of selective breeding the longfin mutation came into the picture. Now many years later many new colour and fin mutations are here, and more are still being developed.

Info:
There are over 15 different species of betta. Betta splendens are the ones found in petstores. Bettas are labyrinth fish, meaning they come to the surface for air. As long as a betta has enough water to cover its self and can get air it can survive, but not thrive. When bettas see other bettas they get excited and will flare. Flaring is when the betta spreads its fins and sticks out its gills, looking bigger then he/she actually is. Male bettas (sometimes females) will also buil bubblenests. Bubble nests are what the male uses during breeding, but he will also build one if he is healthy and happy. Bettas are a very popular fish, many people do not know how popular they are untill they get involved with bettas more. Betta shows are held all around the world, mostly in the U.S and Thailand. There are many different colours and fin types of bettas. They come in all colours, except solid purple, but thats coming around. There are also different patterns to, such as marble and bicolours (body one colour fins another). There are also different fin types. Veil tails is what you find in petstores, and is not very desirable and not even allowed in shows. Then there are crowntails, halfmoons(very desirable and expensive!) ect. For more info about colours and fin types visit http://www.bettatalk.com/betta_finnage.htm & http://www.bettatalk.com/betta_colors.htm

Care:
Thoughs who have seen rice paddies know that they are not the size of a little cup, as bettas are kept in at petstores. At least 1/2 gallon of water is recommended. If kept in anything smaller then 2gallons, water changes should be done at least once a week. Always use dechlorinated water as you would with any other fish tank! Bettas are very hardy fish and can tolerate quite a bit. They are tropical fish so a temperature from 70-84 degrees is good. Bettas are carnivorous, which mean they eat meat. Their favorits include bloodworms, blackworms, mosiquito larva, ect. Most of these can be found at petstores and are availble in freeze-dried or frozen form, sometimes even flakes. Bettas can be kept single or in a comuntiy tank. If in a cominity tank make sure there are no fin nippers or fish that look like bettas, ie guppies. Females are best kept in groups of 3 and up, or alone. Males can NOT be kept together.