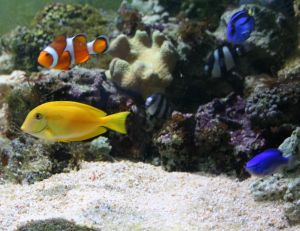 After the movie “Finding Nemo” came out, there was a spike in interest in keeping the types of fish that appear in the movie. I’m just a beginner myself trying to come up with a complete answer to the common “My kids want a Nemo Tank” questions.

General Rule: 1 inch of fish per 5 gallons of salt water. Marine fish do not stop growing because their tank is too small. Plan for the full grown size of the fish and its special needs.

Marlin (Nemo’s Dad) – Clownfish – A good starter aquarium fish. Max full grown size for true percula (Amphiprion percula): 3″, false percula (Amphiprion ocellaris): 4″. (Other clowns are larger and will need larger aquariums.) A full grown pair of true percula clownfish will need a 20 gallon aquarium, 30 would be better. (The male will never reach full size, that’s how they can fit in a 20.) Clownfish can be kept singly or in pairs, but not in threes. Buy two small fish or one fish much smaller than the other. All clownfish are born gender-neutral, so in the aquarium or when mating, the smaller fish will become the male, the larger the female. Omnivore.
Coral (Nemo’s Mom) – Clownfish
Nemo (Title Character) – Clownfish – Remember, you shouldn’t keep clownfish in threes, it would be better to give Marlin and Coral a second chance at happiness than to try to have two males in the tank. (Won’t work anyway, trying to keep a pair of males; one male will morph into a female, then you have to explain that to your kids.)
Jacques (Tank Gang) – Cleaner Shrimp – A good aquarium invertebrate, he will help keep aquarium fish healthy, and eat scraps of food they miss. This does not count towards your inches of fish, since he cleans up after the other fish. Omnivore.
Gurgle (Tank Gang) – Royal Gramma – A good aquarium fish. Max full grown size: 3″. It likes swimming through caves. Carnivore.
Peach (Tank Gang) – Starfish – A starfish shaped like Peach is a good fish-only aquarium invertebrate, may eat reef invertebrates, and are not always reef-safe. Serpent stars ( who generally have a large central disc and small skinny legs) are easier to care for in a mature tank and are reef safe. Carnivore/Omnivore depending on species.

Stop here if you want everything on the list in a reasonably sized tank. The above critters (2 true percula, 1 royal gramma, a cleaner shrimp and a starfish) will require at least a 40 gallon aquarium, 50/55 recommended. For a 20 gallon aquarium, you can have the clownfish and invertebrates, or just Gurgle and the invertebrates, but not all of them.)

Characters Not Recommended for Most Aquariums:
Sheldon (schoolmate) – Sea Horse – Very difficult to keep. Should be kept in a single species tank, and fed live foods. (Not compatible with any of the fish.) Not recommended for beginners.
Pearl – Flapjack Octopus – A deep sea octopus. Not available in the aquarium trade.
Octopi in general – These creatures have a lot of personality, but don’t take kindly to imprisonment in an aquarium. They are incredible escape artists and will slip out of aquariums with conventional hoods, sometimes to their own detriment. Depending on species, they can grow up to 3 feet, and require a very large aquarium. Eats fish and invertebrates. (Not compatible with any of the fish on the list.) Not recommended.
Gill (Leader of the Tank Gang) – Moorish Idol – Finicky Eater, very difficult to keep alive in an aquarium. Not recommended.
Crush (Turtle Family) – Loggerhead Sea Turtle – Too large for an aquarium.
Squirt (Turtle Family) – Loggerhead Sea Turtle
Turtles in general – Saltwater turtles are federally protected in the United States. You may consider a separate freshwater turtle tank if this is your child’s favorite character from the movie. Do a search for the “Plymouth Redbelly turtle Headstart Project.” There is great info there on filtration for a turtle tank, and if you live in MA, you can join the project.
Mr. Ray (School Teacher) – Spotted Eagle Ray – Has a venomous tail spine, and requires a very large aquarium. Not recommended for beginners.
Bruce (Fishaholic) – Great White Shark – Obviously too large for an aquarium.
Anchor (Fishaholic) – Hammerhead Shark – Obviously too large for an aquarium.
Chum (Fishaholic) – Mako Shark – Obviously too large for an aquarium.
Sharks in General – There are some sharks that can be kept in captivity, but most require exceedingly large aquariums as they grow up (starting at 200 gallons, and going up to custom tanks that dwarf the family swimming pool,) and must only be considered after doing a lot of research on the particular breed of shark you wish to raise. Also note: most tank mates are “food, not friends.” Not recommended for beginners.
Nigel – Pelican – Birds don’t live in aquariums.

Other critters observed in the movie:
Anglerfish – Predatory, deep sea fish, not commonly available.
Krill – Yummy snack for your carnivorous fish, more often sold frozen as food than live.
Whale – Yeah right, you want a whale in your aquarium?
Anemones – Requires a mature aquarium, with pristine water conditions, and experienced care. Your clownfish is just as likely to “host” an easier to keep coral (LPS, Long Polyped Stony, corals are a good choice) as an anemone, and it will be a lot less likely to die on you. Clownfish do not require an anemone or coral host to survive.