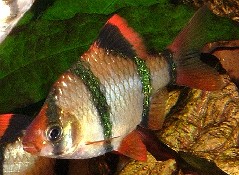 Because it is easily bred in large numbers (both in the United States and in the Far East), the price of Tiger Barbs is relatively low and a very popular choice for tanks.

First described by the German ichthyologist Bleeker in 1855 as Barbus tetrazona the generic classification of this and other barbs has been the subject of some debate. Currently the Tiger Barb is most correctly known as Capoeta tetrazona.

The Tiger Barb is one of the most commonly imported tropical fish. In 1992 (Chapman, et.al. 1994), about 2.6 million Tiger Barbs were imported into the United States, making it the tenth most popular ornamental fish. Because it is easily bred in large numbers (both in the United States and in the Far East), the price of Tiger Barbs is relatively low. A number of color varieties are now commonly available including the Green Tiger Barb, a nearly black variety, a bluish variety, and an albino strain.

In the wild, Tiger Barbs are found primarily in still or moderately running bodies of water. Swamps, ditches, canals and other relatively shallow waters surrounded by dense vegetation are preferred habitats. They are usually found over substrates with a thick layer of mud and decomposing plants.

Tiger Barbs are fairly distinctive in appearance. Their background coloration ranges from light pink to yellowish with a metallic sheen. The dorsal surface tends toward a gold-brown and the belly fades to a whitish hue. There are typically four blackish-green vertical bands that encircle the entire body, though many fish that are available in pet stores have one or more incomplete bands. The dorsal fin is blackish-green at the base and is trimmed along the top in brilliant orange or red. The upper and lower lobes of the tail and the ventral fins are usually orange or red. The snout may also be colored orange or red. A pair of tiny barbels may be visible near the mouth of some fish.

It is difficult to distingush between male and female Tiger Barbs, especially based on the intensity of color or markings. It is impractical to try to determine gender of Tiger Barbs that are less than an inch long. In young adult fish, females are generally slightly larger than males and have a higher, broader body. This is especially obvious when the female is filled with eggs. In the picture below, the male is the fish on the upper left and the female is on the lower right.

Capoeta tetrazona breeds in typical barb fashion. Males are active pursuers of the females but the courtship is usually over after a short chase. As many as 300 – 500 slightly adhesive eggs are scattered, three or four at a time, usually among thick plants. The eggs are small and light yellow in color. Hatching begins in about 24 hours and the young are soon visible clinging to the plants and moving around near the tank bottom. They are very small at first and require infusoria as a first food. They grow quickly if there is adequate room and are soon able to take baby brine shrimp and finely-ground flake food.

I have had Tiger Barbs many times over the years that I’ve been in the aquarium hobby. They are fascinating, personable fish that, when in good color, can even rival many marine fish for color and flash. They are fairly hardy and are tolerant of a range of water conditions, though they prefer a tank that is clean. Mine are kept in water with a pH of 7.6 with a high level of hardness. They are definitely schooling fish and seem happiest in small schools of six or more. I once kept a 55 gallon tank with a school of about 40 Tiger Barbs and it was one of the prettiest tanks imaginable.

The only drawback to Tiger Barbs is their tendency to be fin-nippers. Fancy, long-finned fish like Betta splendens, Angelfish, Goldfish and others will prove to be irresistable targets for these little bandits and the fins of the other fish will soon be in tatters. I have found the fin-nipping tendency to be reduced when the Tiger Barbs are kept in schools of eight or more. Individual Tiger Barbs, especially males, can become tank bullies. It is not unusual, however, for Tiger Barbs to chase each other around the tank…though very little damage is ever done.

I have found that Tiger Barbs will eat practically any commonly available aquarium food. Mine have done well on flake food supplemented by frozen brine shrimp, frozen tubifex worms, Hikari Algae Wafers and (by far their favorite food) frozen bloodworms. My current school of eight Tiger Barbs come to the surface and ravenously take frozen bloodworms right out of my fingers.

One other observation…Tiger Barbs, once they’re feeling secure in their aquarium, seem to be practically fearless. Every time I put my arm into the tank to clean the glass or re-arrange a plant I can count on being bitten mercilessly by my little piranha wanna-bes. Most of the time it is merely a tickling sensation but occasionally one of the larger fish will actually produce a pretty good little pinch!!

If you’re looking for a flashy, colorful, hardy and relatively easy-to-breed fish to go into a species tank or in a community tank with no long-finned fish then you would be hard-pressed to find a better fish than Capoeta tetrazona, the Tiger Barb.

Tamaru, Cole, Bailey and Brown, 1997. A Manual for Commercial Production of the Tiger Barb, Capoeta tetrazona, A Temporary Paired Tank Spawner. Center for Tropical and Subtropical Aquaculture Publication Number 129.
(available on the web in pdf format at: http://www.ctsa.org/upload/publication/CTSA_129631672861294217744.pdf