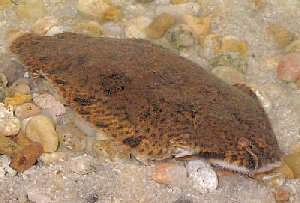 The freshwater flounder is an interesting fish that many of us have noticed in fish stores, and most commonly find their way into aquarists tanks as impulse buys.

The freshwater flounder is an interesting fish that many of us have noticed in fish stores, and most commonly find their way into aquarists tanks as impulse buys.

These fish are not what they appear to be. They are neither freshwater nor flounder. There are several species that are commonly sold as freshwater flounder or dwarf freshwater flounder. The most common species is Trinectes maculatus (aka hogchoker, formerly known as Achirus fasciatus). Achirus lineatus (Lined sole) and Achirus achirus (Drab sole) are also widely sold to aquarists. I am including some pictures of each, but note that due to the variability in color these photos should not be used for identification purposes. The species are generally only distinguishable through ray and scale counts.

All of these species are technically American Soles, related to marine soles and tonguefish, and both are usually “right-eyed” in that the upper face of the fish was the embryonic right side. The name achirus comes from the lack of pectoral fins, and although some of these species do have rudimentary pectorals, they are often difficult to discern.

Differences between the Achirus species and Trinectes are minimal, but not a whole lot is known about the life history of either one. There may be differences in tolerance for different levels of salinity and temperature (which may be partly responsible for different levels of success in keeping them), but these are not known. They usually reach a maximum size of 4-6″ (sometimes as large as 10″), and are estuarine to marine with sightings of juveniles in freshwater. The ranges of these fish stretch from Massachusetts down to Venezuela.

Since hogchokers are generally the most common species we see as aquarists, I will focus on them. They got their name because of the difficulty that pigs had swallowing these fish when fed them by farmers. Hogchokers generally develop to around 4cm (1.6″) by 1 year of age, and 7cm (2.8″) by 2 years, so the fish you see in your LFS are generally less than a year or two old. All of these soles spawn in summer, and are probably wild-caught. Often, the people in fish stores are not equipped to discuss these fish properly, and may mention that they prefer brackish water.

These fish have complex patterns of movement up and down salinity gradients, with attempts to detect patterns mostly failing except for alternate-tide movement patterns. They may need changes in salinity in ways which aquarists would be hard-pressed to satisfy. As adults, they are almost entirely marine and high-salinity estuarine fishes. They all feed primarily on small invertebrates, so may take bloodworms, although smaller (frozen or live) food would probably be preferable.

Another consideration which appears to be mostly neglected in discussions is the fact that they are not tropical at all. They are found in waters moderated by ocean temperatures, and the widest range estimate of their temperature range tops out at 24 degrees C (75 degrees F).

Based on this information, and on the consistent bad luck that experienced aquarists have in keeping these fish alive for more than a few months, I would not recommend purchasing these fish. If you are aware of the considerations involved, and still want to get them, I suggest that a brackish tank with a temperature around 70 degrees and sand (or finer) substrate is probably your best bet with these fish.